Briefing with the media, dedicated to the newly identified facts which relate to the aviation disaster of Malaysian aircraft "Boeing 777".


The appearance of The Chief of Staff of the Main Operations Directorate – deputy chief of The General Staff Andrew Kartapolov:

After the Malaysia Airlines Boeing-777 accident on July 17, following the international airway Amsterdam — Kuala Lumpur, we can find quantity of conflicted information. In this case the Russian Federation Ministry of Defense considers necessary to submit information having at the General Staff disposal.

On the scheme you can see the international airway.The Boeing-777 was supposed to fly on this airway. Draw your attention to the fact that the aircraft followed inside the specified air-corridor to Donetsk, then it deviated from the route to north. Meanwhile the maximum distance from the left border of the air-corridor was 14 kilometers.

Then we can see that the Boeing-777 turned back to the borders of the specified air-corridor. Nevertheless Malaysian aircrew didn’t succeed the maneuver. At 17.20 we entered the event of the aircraft rate reduction, at 17.23 the aircraft’s point blinked off on the radar. Why did the aircraft cross the border of the air-corridor? Was it the navigation mistake, or the aircrew followed the Dnepropetrovsk ground control orders? We will find the answers after “black boxes” and communication decoding.

According to our information on the day of the accident the Ukrainian Armed Forces deployed 3 to 4 artillery battalions of Buk-M1 missile system not far from Donetsk.

The system allows hitting the targets on the distance up to 35 kilometers and on the altitude to 22 kilometers. Why did the Ukrainian Armed Forces deploy these air defense units in the Donetsk region?As we know militants don’t have aircrafts.

On the scheme we can see that both projected impact point and the airway are inside the air defense battle zone of the Ukrainian Armed Forces’ Buk-M1 missile system.

We have satellite photos of the Ukrainian Air Defense systems deployed in the South-East of the country.

Here you can see a photo of the same area on July 17.

Draw your attention that the antiaircraft system is absent on this photo.

On the fifth photo we can see Buk-M1 artillery battalion deployed 50 kilometers east to Donetsk and 8 kilometers south to Shakhtarsk. We can answer: why the battalion was deployed near to the territory controlled by militants just before the accident?

On the photo of same area dated July 18 (photo No. 6) we can see that the battery left the occupied position.

Besides it, on July 17 we detected increased activity of Ukrainian radars 9S18 Kupol-M1 of the Buk missile system.

On the photo you can see that 7 radars worked on July 15, 8 radars on July 16, and 9 radars on July 17. Since July 18 there are only 2-3 radars per twenty-four hours. We shall find out the reasons for the events.

I want to expose air situation in Donetsk area that day.

On the picture you can see information of objective control since 17.10 to 17.30 Moscow time.

At that time there were 3 civilian aircrafts:
Flight from Copenhagen to Singapore at 17.17;
Flight from Paris to Taipei at 17.24
Flight from Amsterdam to Kuala Lumpur.

Besides it, Russian system of air control detected the Ukrainian Air Force aircraft, purposed Su-25, moving upwards toward to the Malaysian Boeing-777. The distance between aircrafts was 3-5 kilometers.

What was the mission of the combat aircraft on the airway of civilian aircrafts almost at the same time and same altitude with the civilian craft? We want to have this question answered.

The video of the Rostov Aerial Center of the Joint Air Traffic Management System can corroborate the information. Chief of Staff of the Air Force lieutenant-general Igor Makushev will comment the video. 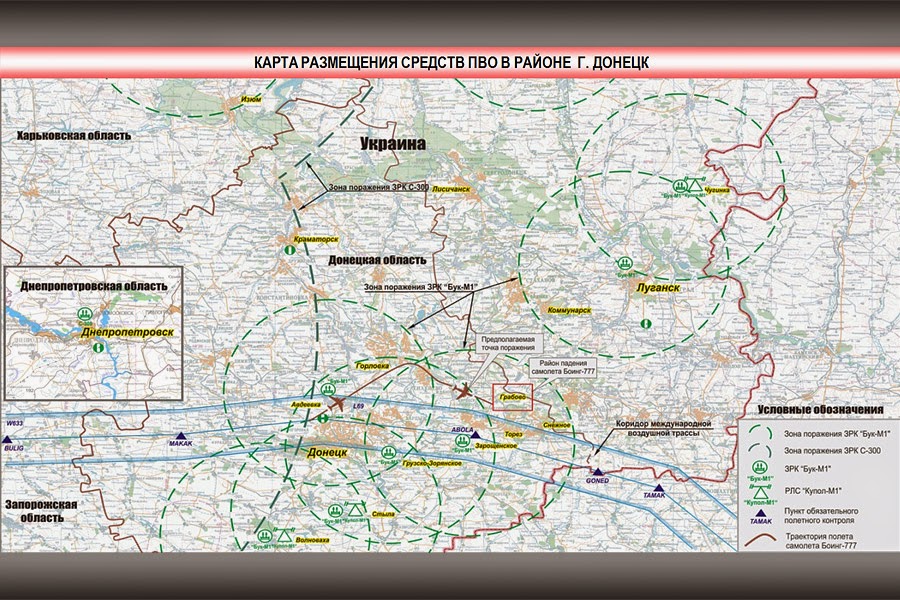 The Comment of Chief of Staff of the Air Forces general- lieutenant Igor Makushev:

In the upper left corner there is a Boeing-772  mark, following the route from Copenhagen to Singapore.

Under this point there is another aircraft, it is Boeing-777 mark, which is on his way from Amsterdam to Kuala Lumpur.

And on its right there is a Boeing-778 mark making its way from Delhi to Birmingham.

All the three aircraft have been steadily monitored by the three radar stations of the air traffic control of the Ministry of Defense of the Russian Federation.

Boeing-777 is moving towards the Russian Federation state boundary and is to cross it in the point of «TONAK».

An air traffic control officer has been controlling the aircraft flight and keeps on enquiring its flight variables to compare them with the given ones.

At 17.20 P.M. at the distance of 51 kilometers from the Russian Federation state boundary and the azimuth of 300 degrees the aircraft started to lose its speed obstructively which is quite distinctively to be seen on the table of the aircraft characteristics.

The aircraft was steadily monitored by radar stations of Ust-Donetsk and Butirinskoe during 4 minutes period.

Air control officer having enquired the characteristics of newly appeared aircraft couldn’t possibly get them because it is in all likelihood that the aircraft had no secondary deduction system amounted on it, which is put typically for military aircraft.

The early detection of this aircraft appeared to be quite impossible because the air situation control is usually performed by radars working in a standby mode which detection possibilities at the given distance are over 5000 m altitude.

The further aircraft flight variables changes on its route testified the fact that it is now flying in the area of Boeing crash and is monitoring the situation.

Earlier the Ukrainian officials reported that on the day of the Boeing-777 accident there were no military aircraft available in the region. So, as you can see, it is not appeared to be true. Thank you for your attention.

Ladies and Gentlemen, we also have some questions to our US partners.According to the statement of the US representatives they have some pictures from the space supporting that missile launching was made by the militants.But nobody has seen these pictures.

According to our dates from 17:06 till 17:21 Moscow time on the July 17 over the South-Eastern territory of  Ukraine flew US space satellite. This is a special device of the experimental space system designed to detect and track various missiles launches. If the US party has photos made by the satellite, please let us ask them to show the world’s community for further investigation.

Is it coincidence or not? However the time of the Malaysian Boeing-777 accident and the time of the observation done by the satellite over the Ukrainian territory are the same.

To conclude it I would like to mention that all the concrete information is based on the objective and reliable dates of the different Russian equipment in contrast to the accusations of the US against us made without any evidence.The good example of such fact is that some mass media showed transportation of the Buk-M1 missile system from Ukrainian to Russian territory.We can clearly see that its frame-up.

These pictures were made in the city of Krasnoarmeisk that is confirmed by a banner situated close to the road. This banner has an address of the car shop situated at the Dnepropetrovskaya, 34.

Since May 11 the Krasnoarmeysk city is under control of the Ukrainian Armed Forces.

That is why we have some questions.

What kind of launching system is it? Where is it transported? Where is it now? Why is it unloaded completely? What was the last time it launched missiles?

To end my speech I would like to emphasize that the Russian Federation did not deliver to the militants any Buk-M1 missiles systems and other equipment.

All the dates prepared by the Ministry of Defense of the Russian Federation will be transmitted today to the experts of the European countries and Malaysia. I hope these dates will help to make the reliable investigation of the tragedy that happened on the July 17 over Donetsk.

The Ministry of Defense will continue to inform you about the newly revealed facts connected with the air disaster of Malaysian Boeing-777.

Thank you for your attention.